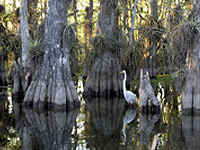 Donationtown.org allows you to schedule online appointments for Florida donation pick ups. It has never been so convenient to make charitable donations in Florida until now.

Donating in Florida is Free and Easy

The Sunshine State of Florida is set in the unique spot of peninsular land that is surrounded by the Atlantic Ocean to the east, the Straits of Florida to the South, and the Gulf of Mexico to the west. Most of the Florida’s land is flat with low rising hills, and its highest point is only 345 feet above sea level. The climate is subtropical and tropical, which makes the surrounding ocean temperatures warm, and provides the atmosphere for lovely tropical flowers year round. Tallahasse is Florida’s capital, and its largest city is Jacksonville. Brought into the union of the United States in 1845, Florida’s population was slow to grow, but now is the fourth most populous state in the United States.

Florida’s human history goes back as far as 14,000 years with the early Paleo-Indian people, who, by 500BC, began to form individual groups with distinct cultures. In the 16th century when the Spanish arrived, the main Native American tribes in the area were the Apalachee, the Timucua, the Ais,the Tocobaga, the Calusa, and the Tequesta.

When the Spaniard Ponce de Leon arrived in 1512, the flowers were in full bloom and he called it La Florida, which means “flowery land.” In 1565, another Spaniard, Pedro Menendez de Aviles, founded St. Augustine, which still exists and is the oldest city in the United States.

Florida is now famous for a variety of reasons, and perhaps one of the biggest reason is that it is home to Walt Disney World, which is the the world’s largest vacation resort. Florida’s Merritt Island is home to the Kennedy Space Center, which has been the launching point for every human mission into space since 1968.

While Florida enjoys the fourth largest economy in the United States, as of 2008, it also had 2.4 million people living in poverty, making the need for Florida charitable donations imperative. Wonderful charities such as Vietnam Veterans of America, the Red Cross, the Salvation Army, Habitat for Humanity, National Kidney Foundation, and St. Vincent de Paul, among many others, are always accepting donations. Make a difference in the lives of those who need assistance and schedule your online Florida donation pickup today.

Most of the charities in the Florida Donation Town directory will come and pick up the following donations:

Where Can I Donate Clothes, Furniture, Books and Other Household Goods in Florida?

Charities in our directory accept your clothing donations and other household goods donations from the following Florida counties and cities: