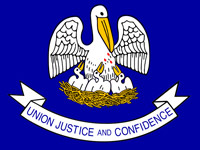 Donate clothes and other household items in Louisiana. Charities such as Rolling Hills Ministries, Vietnam Veterans of America, Shreveport – Bossier Rescue Mission and more will pick up your donations for free and leave you a tax deduction receipt.

Donationtown.org allows you to schedule online appointments for Louisiana donation pick ups. It has never been so convenient to make charitable donations in Louisiana until now.

Donating in Louisiana is Free and Easy

First explored by the Spanish in the 16th century, the area that is now known as Louisisana was developed more by the French, who arrived in the 17th century and took control of the vast stretch of land encompassing the Gulf Coast and the Mississippi River, going all the way up into Canada. In 1682, Robert Cavalier de La Salled named the region Louisiana after the French King Louis XIV, and the region included the land that is now divided into Wisconsin, Michigan, Illinois, Indiana, Nebraska, Iowa, Kansas, Oklahoma, Missouri,  Mississippi, Arkansas, South Dakota, North Dakota, and Minesota. On December 20, 1803, the United States, under Thomas Jefferson, bought the land from Napoleon Bonaparte, in the Louisiana Purchase, which cost only 15 million dollars (though today’s equivalent is more like $217 million).

The capital of Louisiana is Baton Rouge, and New Orleans is its largest city. Louisiana is divided into parishes rather than counties, and Jefferson Parish is the largest in terms of its population. With a total of 64 parishes, Louisana is the only state to designate areas into parishes.

Lousiana is known for its rich and diverse multicultural population, which is a remnant of the French, Spanish, Indian, Haitian and African immigration which took place mostly in the 18th century. As a result, French speaking Creole and Cajun cultures developed with their unique music and wonderful food. The city of New Orleans is a practically iconic representation of this mix of cultures, and is also one of the most visited cities in the entire United States. Louisiana is also known for the devastating hurricaines in the Gulf Region, most recently Hurricaine Katrina and Hurricaine Gustav. It is also part of the area most affected by the Deepwater Horizon Oil Spill, which is the largest environmental disaster that the US has ever experienced.

In light of the recent tragedies in the lives of  people in Louisiana, it is more important than ever to donate goods to Louisiana charities. With so many people losing their homes and livlihoods, donations of clothing and household items are so imperative right now, and Vietnam Veterans of America, the Salvation Army and Habitat for Humanity are all some wonderful charities to consider. Schedule your online Louisiana donation pick up now. You won’t regret helping the vast numbers of people there who truly need your assistance.

Most of the charities in the Louisiana Donation Town directory will come and pick up the following donations:

Where Can I Donate Clothes, Furniture, Books and Other Household Goods in Louisiana?

Charities in our directory accept your clothing donations and other household goods donations from the following Louisiana counties and cities: