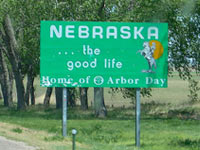 Donationtown.org allows you to schedule online appointments for Nebraska donation pick ups. It has never been so convenient to make charitable donations in Nebraska until now.

Donating in Nebraska is Free and Easy

Most of the charities in the Nebraska Donation Town directory will come and pick up the following donations:

Where Can I Donate Clothes, Furniture, Books and Other Household Goods in Nebraska?

Charities in our directory accept your clothing donations and other household goods donations from the following Nebraska counties and cities: